Our Birder Moment of the Year: Pel’s Fishing Owl, Spotted! 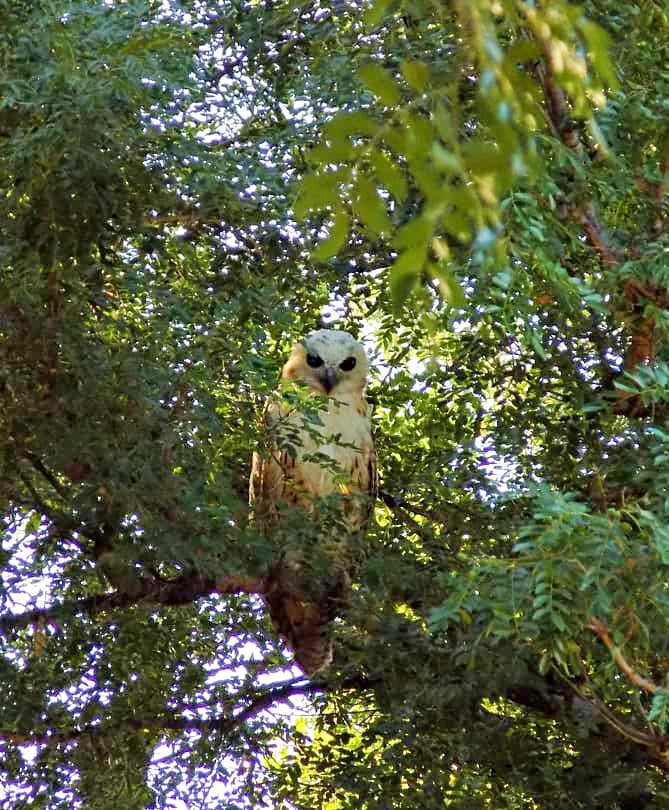 Birding enthusiasts travel far and wide to South Africa, one of the hottest global destinations for feathered friend safaris. We see why after an encounter with a Pel’s Fishing Owl while walking to one of the river’s temporarily exposed islands. Limpopo Valley geography is uniquely conducive to a booming variety of avian species- the Limpopo River bordering Botswana and Zimbabwe creates a riverine oasis and a diverse range of habitats. Limpokwena Nature Reserve is part of the The Soutpansberg-Limpopo Birding Route, as recognized by BirdLife South Africa. Over 600 bird species have been recorded in the province, with an impressive 35 Southern African endemics and 48 Southern African near-endemics.

Moreover, many Central and East African birds reach their southern-most distribution in Limpopo and are not found anywhere else in the country- the Black-fronted Bush-Shrike, Arnot’s Chat, Blue-spotted Wood-Dove, Racket-tailed Roller, Senegal Coucal and Tropical Boubou.

What an indescribable kind of rush it was, standing in the middle of the mighty Limpopo River and seeing the last of the Kruger Park “Big Six” list, here at Limpokwena Nature Reserve: the lappet-faced vulture, the saddle-billed stork, southern ground hornbill, martial eagle, kori bustard and finally the secretive Pel’s Fishing Owl! Scotopelia peli is one of the rarest birds in in South Africa. They usually nest 20 meters from the water’s edge, so Limpokwena is truly blessed to have 12.5 km of river frontage on the north and east perimeters of the reserve, where these subtropical, river-dependent beauties are found.

These gorgeous guys are one of the largest owl species in the world, with a wingspan of around 153 cm. That’s more than Gary Coleman’s height in 4 inch high heels! They also have a special diet of fish and frogs, and sometimes juvenile crocodiles. Their adaptations include less feathering on their toes, minimizing the plumage that gets wet while fishing. Similar to diurnal fish-hunting raptors, they have rough spicules under their talons to grip on to slippery snacks. 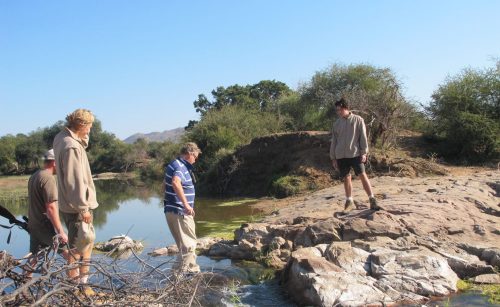 Since hearing and stealth is not important to its hunting techniques as fish cannot hear them underwater, the Pel’s Fishing Owl does not have the soft edges on its flight feathers that most owls require to fly silently. Also, the baritone hoot of these birds is iconic – first a single horn-like, long and deep note, followed by a signature higher pitched hoo-hoo.

For centuries, indigenous hunter gatherers have relied on bird alarm calls to reveal nearby predators, and the Pel’s Fishing Owl can be heard from an astonishing 3 km away. They also like to recycle, using old Hamerkop nests to roost in.

It was a breath-taking surprise to find a roosting site for a pair of these wild gems in late June, as egg laying season was coming to an end. On a morning bush walk, we took advantage of the lower water levels in the Limpopo River and clambered to an exposed sand bank in the middle of the water. Aside from hearing their iconic call, the eagle eyes of our Game Drive Guide Riley spotted an area full of spoor with fish bones in it, and new right away that they had to be roosting nearby. Their rich burnt-orange coloration is so much more vivid than one would expect, especially after only seeing the more muted tones of their other owl cousins.

It could be that this is a once-a-year occurrence, as that island in the river is not usually accessible in the other three seasons of the year. . . unless you like swimming with the crocodiles. Because these owls only nest by rivers, and the female has to meet energy requirements for laying two eggs despite only one chick ever surviving, a lot of work goes into finding a specific riverine habitat to raise just a single offspring. This was quite a special moment for the volunteer students, despite being more Big Five kind of guys than birders! There were audible gasps when this shy, deep auburn owl took flight and showed off his unbelievable Gary-Coleman-in-high-heels wing span!

What you can read next