The Day the Wild Dogs came to Play!

Every once in a while, just when you least expect it, and game drives seem to be at a bit of a lull… something magical happens.

Riley was taking a small bushwalk along the Limpopo when out of nowhere, a group of 5 African wild dog came running down to the river. This was astounding, as Botswana has a very healthy population of dogs but we would never have imagined that they would wander down to us at Limpokwena. Especially while we’re out on a bushwalk! 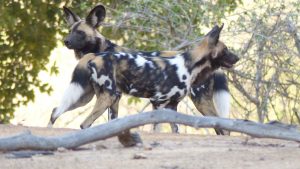 Once the dogs noticed that they were being watched by the group of curious humans, they started barking! Wild dogs do not attack humans but these guys were certainly brave and making themselves known.
After this brief encounter with the dogs before they moved off, we spotted the dogs a few more times along the Limpopo river on numerous game drives during the following week, and quite often discovering their kills scattered along the river.

After about an absence of 2 weeks without a single trace of the dogs, no spoor, no kills, no scat, we had another sighting!
This time, there were more! A lot more! It looked like the initial 5 dogs had gone home and brought all their friends!
We counted at one of the first initial sightings more than 22 dogs. This was a group of adults, sub-adults and pups, all arriving from across the Limpopo for a little vacation stay at Limpokwena! They stayed with us for over 2 weeks.
It was just so awesome having them with us! Every drive became like a treasure hunt, as we tracked the dogs and discovered their kills – they sure did eat a lot of Impala! They were relaxed and calm in our presence which does show  that wherever they came from, they were used to people.

Meanwhile, back in the office we did our best to try and track down the packs origin. We contacted all the usual wildlife organisations with pictures and videos. We contacted some Botswana organisations too, but with no luck. Seems like this pack is just flying beneath the radar and had not yet been identified.

While they were with us, we came home one evening to bump into the pack of dogs right at the entrance of the lodge, where they had killed a young Waterbuck and were feeding frantically right on the driveway with their barks and yelps echoing noisily around us. At one stage our vehicle was surrounded by dogs weaving in and out of the bushes while they fed. We had to put our own dog under house-arrest for the next few days while the dogs were around so our poor Rocco didn’t bump into them whilst out on his usual lodge patrol!

After about a month since the initial 5 showed up, they all disappeared.
We didn’t see them again.
We waited, and watched and even did a bit of praying. But they didn’t return.
Our main concern was their safety, as this area has a very high number of farms where rare game animals are bred. Predators are not very popular. We were concerned for their safety.

And then, one day, we got news!
The dogs had been seen again! There was a large pack further inland and on another private reserve! They were safe! The reserve owners assured us that they were safe, and that they would keep an eye on the dogs if they moved off again. Such a relief!

This occurrence is just another reason why the bush is just so surprising! Just when you think you know what is coming around the next corner, bam! A wild dog! Next time it could be something else, like a leopard or elephant or one day, it could also be a lion! With nature, it can never be predictable.

Our lesson: When you decide to sleep in and miss a drive, that will be the day when everyone else will see something cool!