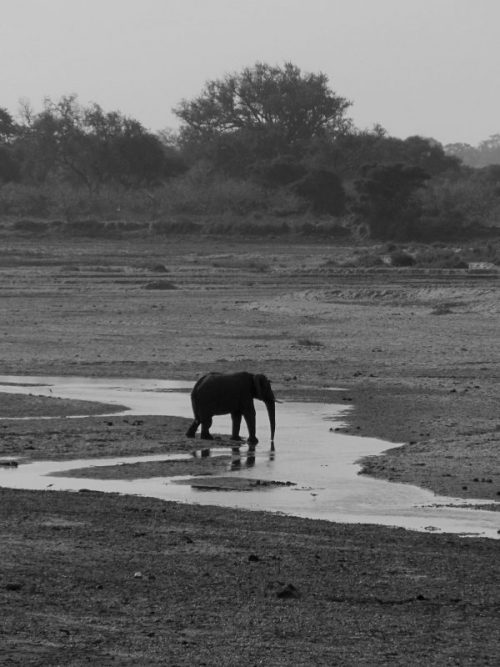 After much blood, sweat, and tears, Limpokwena Nature Reserve has completed one of our short-term conservation projects. We dropped fences along 7.5 km of the Limpopo River, which winds grandly through our pocket of the Bushveld next to Botswana. This has allowed all kinds of furry, feathered, and scaly visitors to come for a holiday in South Africa. Limpokwena’s dream is to do away with all fences, except for the electric fence protecting our accommodation. We will get there eventually, but want to share the magic of our new animal tourists – truly wild elephant herds coming and going as they wish. Animal autonomy for the win! Seeing these behemoths at Limpokwena Nature Reserve under their own free will is wonderful.

We had fantastic memories with our guests, unwinding over sun-downers on a koppie after adrenaline-filled safari drives. It’s been interesting to watch the landscape transform time since their arrival. Only two months ago in early May, we were engrossed with the hunt for spoor and signs that weren’t common to find.

Coming across warm, gooey dung was like an early Christmas present or a free case of beer. Massive in size yet eerily light on foot, we always seemed to miss seeing them by a hair at first. . . The traces they left behind include entire Mopane and Leadwood trees pulled out by these six tonne mammals like they were daisies, stretches of road with uprooted water pipes, several burglaries to the hangar where we store animal feed, and some cheeky camera trap selfies. At a first glance, it would seem like the elephants completely demolish the Bushveld. 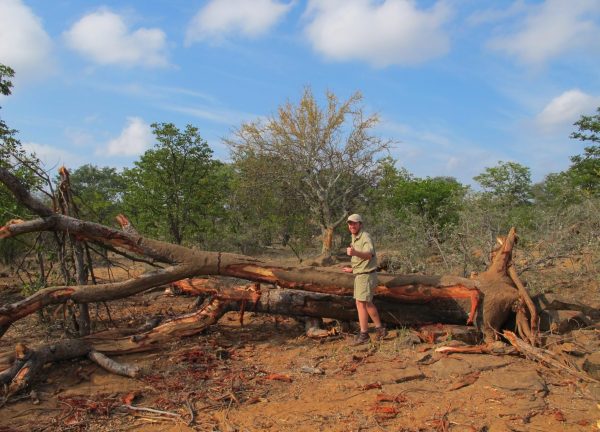 However, the damage they cause is not always a negative for the ecosystem. These fallen trees and shrubs reduce soil erosion from rain and wind, creating seed banks that are safe from elements and hungry grazing animals. I guess the animal feed they helped themselves to will be eventually returned to us in the form of grass growth, if managed correctly.

At least this is what we tell ourselves spending weeks acting as an elephant clean-up crew. As a friend once said, “elephants are lovely, when they’re not on your property”. Man, these guys don’t joke around when they eat at the tree buffet, followed by happy hour at our borehole reservoirs. . .

At first, they would follow the dried up riverbeds towards the opposite side of the nature reserve in the early morning, then hurry back to Botswana for the entire afternoon. We believe this is because they still remember the old owners hunting for wild game and elephants until 2013, when Bivack Farm became Limpokwena Nature Reserve. There are plenty of reports that elephants return to a culling or hunting site to tenderly hold the bones of the deceased with their trunks. At his previous occupation our Game Drive Guide, Riley, has seen elephants take a disliking to a certain member of his staff, and they would charge even just even hearing this said person’s voice. Luckily, that is not the case at Limpokwena Nature Reserve. We keep our distance so they remain calm, but it is always unwise to attempt to cuddle one no matter how gentle they can appear.

It has taken less time than we expected for them to familiarize themselves with our safe, no shooting zone. At the hangar with our animal feed, the wire fence was trampled through immediately, and the boma fence we build from thorny acacia was pushed aside with ease. At least the tasty goodies were a reason to keep returning to our slice of elephant heaven. We were also careful never to fire any warning shots or make loud noises to scare them away. In just two months, almost every road now has a smattering of spoor, from large lone bulls to different breeding herds with the most adorable baby footprints.

An amazing moment was when Riley took some Dutch guests on an afternoon drive. They came back hooting with happiness about a breeding herd crossing the river. This meant that elephants were starting to feel more at ease here in the late afternoons, before returning to their original habitat. Fantastic news! The next few sightings seemed like mirages or hallucinations. You’d never hear an elephant but just catch the glimpse of his rear end disappearing quickly into the thick bush. Funnily enough, other wild game and birds will make much more of a commotion when they move around. Even the ubiquitous and dainty impala could not out stealth an elephant. 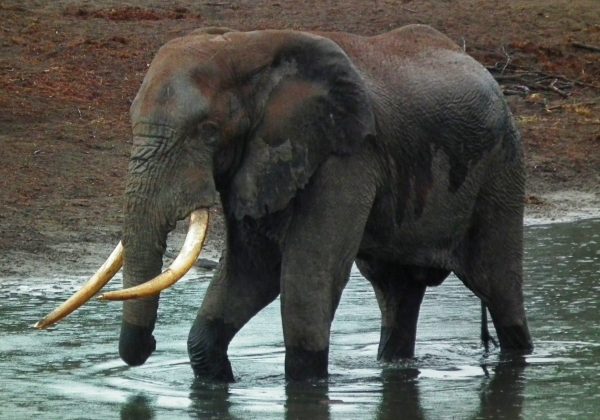 Then, about a month ago, we started hearing the unmistakable rumble of elly-bellies and the crack of branches being ripped off in the late evening, just a stone’s throw away from the Lodge! A volunteer student recalls crawling towards the fence on the Mogalakwena River side of our accommodation and coming face-to-face with young bull.

She could just make out eyes and tusks from his moonlit silhouette. He stared at her, and then continued to chew away at his leafy midnight snack. This has become quite a regular occurrence now; we are starting to feel spoiled by nightly encounters although the sense of wonder never goes away. We even built some extra picnic tables by the watering hole adjacent to the other side of the lodge for you guys to catch these guys in comfort; no crawling through grass and devils thorns required unless you are into that sort of thing.

Whether it’s having dinner by the watering hole, sharing stories of the day over a braai, or finding solitude at our riverside viewing deck, your stay is directly contributing to the management, preservation, and hopefully the expansion of the territory that so many species of South African flora and fauna depend upon.

What you can read next

Our Birder Moment of the Year: Pel’s Fishing Owl, Spotted!